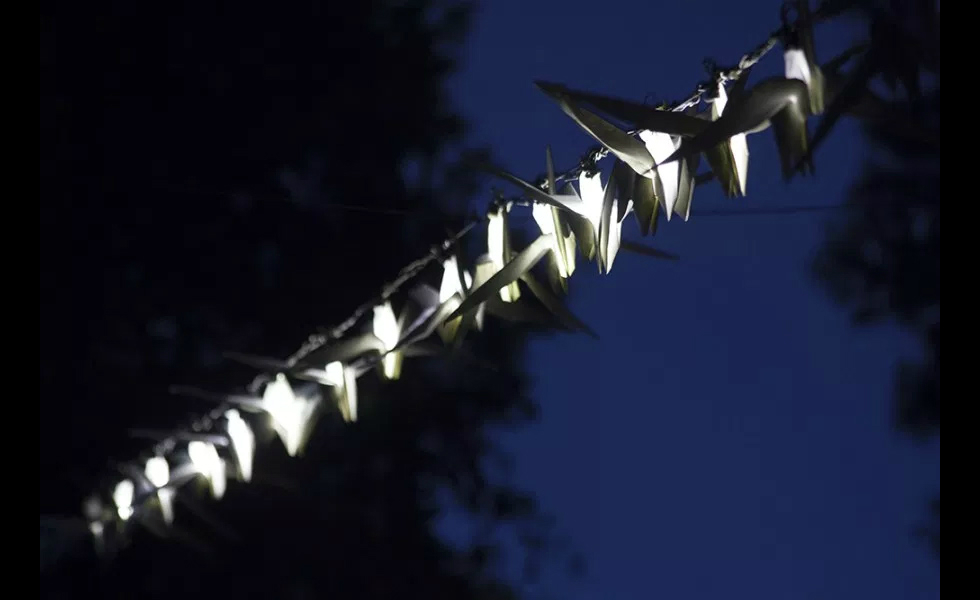 As night falls, Luminous Birds by Kathy Hinde uses synchronised lighting and spatialised music to create the sensation of birds flying overhead. Each bird is handmade using the traditional paper folding technique of Origami. They light up in turn to create an animated sequence similar to stop motion animation accompanied by micro-compositions made from the sounds of distorted pianos and bells. The action of many birds, flocking together, is one of nature’s most amazing phenomena – an ultimate act of cooperation, hundreds moving forward in harmony.

Luminous Birds creates a moment out of the ordinary in a surprise location. A magical experience for all the family, to be viewed after dark.

Kathy Hinde is an audiovisual artist inspired by behaviours and phenomena found in nature and the everyday.

Her work grows from a partnership between nature and technology expressed through audiovisual installations and performances that combine sound, sculpture, image and light. Drawing on inspiration from behaviours and phenomena found in the natural world, she creates work that is generative; that evolves; that can be different each time it is experienced.

Hinde frequently works in collaboration with other practitioners and scientists and often actively involves the audience in the creative process. She has created light and sound installations in public spaces, including town high streets and woodlands.

Hinde has shown work across Europe, Scandinavia, China, Pakistan, USA, Colombia, Brazil, Mexico, Canada and New Zealand. She became a Cryptic Associate Artist in 2015. Hinde received an Honorary Mention at Prix Ars Electronica 2015, and in 2014 was runner up for the Sonic Arts Award and listed for the Aesthetica Art Prize. In 2017, she received an ORAM award for innovations in sound and music and a British Composer Award. Hinde has been invited to join the SHAPE network for 2018.