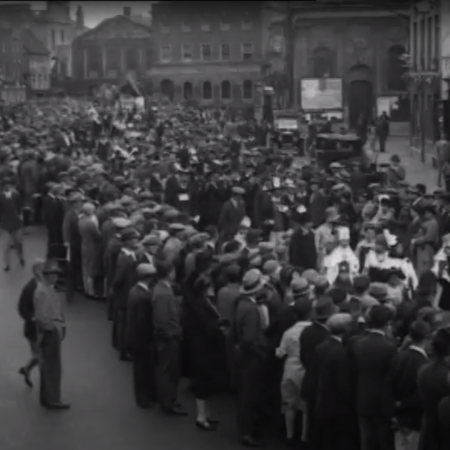 DOCA’s roots are firmly planted in the town’s vibrant Carnival history. There has been a Carnival in Devizes every year (excepting a few gaps for world wars!) since 1912. Originally formed to raise money for the cottage hospital it soon became one of the most popular events in the town’s calendar with early parades reaching more than a mile long!

Around the time of the millennium there was a period of growth and development for carnival and related events in Devizes. The International Street Festival was introduced in 1999 and has grown to become one of the biggest and most exciting free outdoor arts events in the South West. Alongside the Carnival and Confetti Battle, these major annual events are now celebrated as part of a Festival Fortnight every August. Our Confetti Battle is probably unique – we think it is the only one in the UK. This highly popular event was re-introduced in the early 1950s after a gap of a few years and still attracts thousands of people who gather to pelt each other with confetti!

The Devizes Christmas Festival & Lantern Parade began in 2004 and is a shining example of an outdoor arts community celebration with nearly 1000 lanterns made in schools, groups and open workshops paraded through the town on a, usually, crisp winter’s night. Lantern making is an important component of our participatory programme, which continues to grow, involving local artists and others in the construction of inspirational giant lanterns that enhance the parade each year.

In 2015 we introduced the Devizes Festival of Winter Ales, a fundraiser held in collaboration with the Kennet & Avon Brewery. While it has only been running for a short time, it has become ingrained in the Devizes calendar, and along with the Devizes Colour Rush (first run in 2017), raises much needed funds for DOCA and allows us to continue producing the events that have become well loved in Devizes and the surrounding area.

We became a registered charity in 2008, and in 2009 the Devizes Carnival Committee was re-branded to what is now known as DOCA – we are now run by a board of Trustees and employ two members of paid staff who lead on the artistic direction and administration of the charity, We are also supported by a large team of volunteers called the Festival Makers who help us at each event. For more information on DOCA’s staff, see The Team page

The combination of our history, experience and track record enables us to work strategically with partner organisations to further develop outdoor arts for all – artists, audiences, participants and volunteers – in Devizes, Wiltshire and further afield.