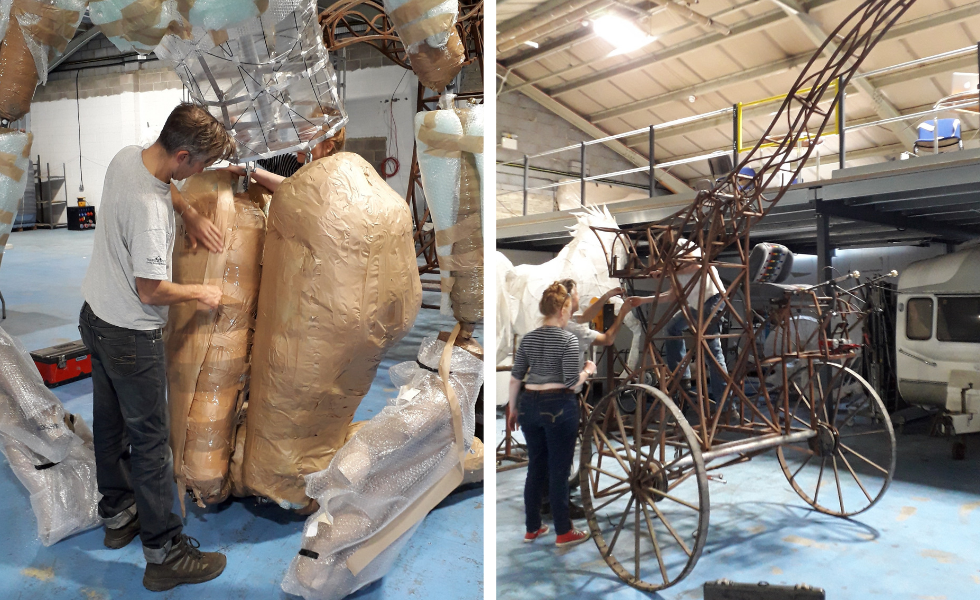 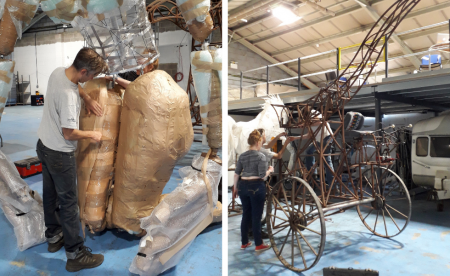 Last Friday saw my first day working on the New Kings Carnival Project with Hannah and David at 101 Outdoor Arts Creation Space. I’d never been to this fantastic creative hub before and was amazed by the sheer size of it – enormous! Everyone was very kind and welcoming to me and I felt at ease immediately… if a little in awe of it all!

The first task was to tackle the giant headless puppet, wrestle it into an accessible position and lay out giant sheets of paper underneath to draw a sort of pattern to work from. We were transforming the stick person style body into something ‘recognisably female’ (while Martin worked on the head in another room) using great wodges of bubble wrap to pad it out. This is a lot like the process drag queens use to transform themselves, so being a huge RuPaul’s Drag Race fan helped me a lot! I am used to working on a much smaller scale so that part was a challenge to me, however by the afternoon I’d gotten into the swing of it and we had a fabulously curvy form coming together.

Hannah is a great and patient teacher and she explained how the Neolithic women would have had very muscular and athletic forms, so getting the proportions right was important even though the giant will be clothed eventually. When we’d got the basics down, Martin came and helped us raise the puppet to a standing position so that we could assess the work we’d done so far. This process in itself was fascinating as the giant has its very own handmade cart, which involves pulleys and booms and all sorts of things to manoeuvre it around. Once she was standing it was easier to judge the scale and a few tweaks were needed to get her looking lovely. Then we wrapped her in tape and by then it was about time to say goodbye! Hannah will be working on the giant’s costume next.