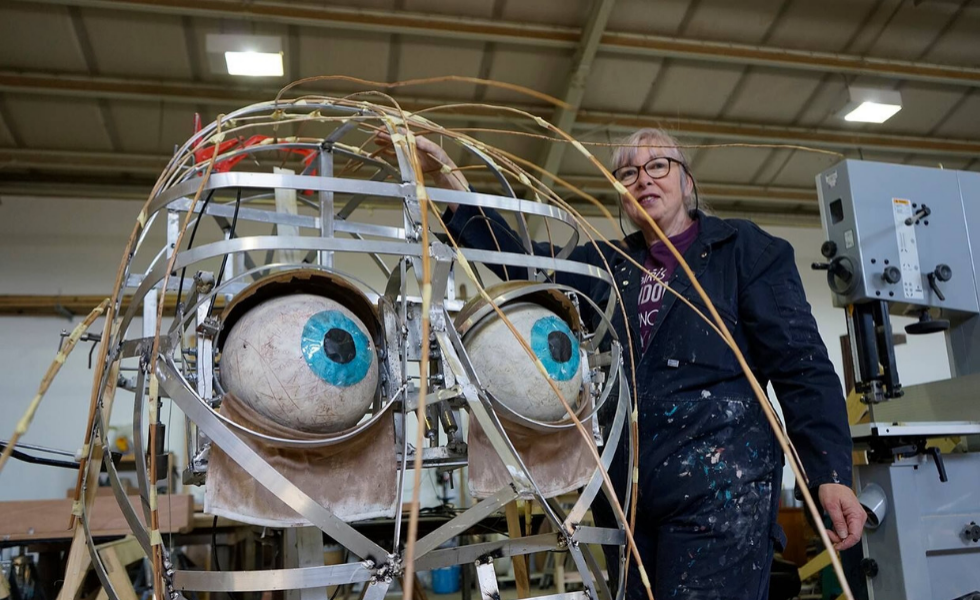 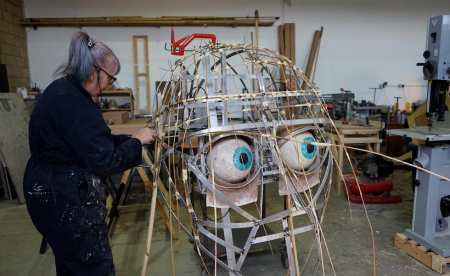 What a day I had at 101 Outdoor Arts! Started off by meeting Martin, he is a very talented guy and is building the giant. He gave me the ‘grand tour’ of the arts centre. There are a number of large and well-equipped work areas and studio spaces. The place is filled with interesting things and even more interesting people. There is a warm, welcoming and highly creative vibe to the whole place and I would defy anyone to be able to go in there and not feel inspired! Danielle from Beautiful Creatures Theatre, had arranged for me to spend the day with Martin, assisting him on the build. The work is already well underway and Martin has fabricated the framework/skull from aluminum and the movable eyes are already installed. The idea is that the face of the giant will be made as a mask to fit the skull, by doing it in that way, it will be possible to make other ‘faces’ for the giant in the same way, so we would be able to have different characters in the future. The ‘body’ of the giant lays rather forlornly in a different part of the workshop, waiting for new clothes and, of course, its head!

For now we are concentrating on getting the head sorted, so it was my job to make a start on the mask. I was very glad that I attended some of the lantern making workshops that DOCA were running last year, as it stood me in good stead for what was to come. Martin ‘armed’ me with a large bundle of withies, a sharp set of secateurs, more masking tape than you can wave a stick at and two large packs of cable ties (to temporarily secure the withies that are inaccessible with tape). There were however no instructions, it’s just a case of get on with it and make it work. I have found that the best way is to just get on and do it. Over-thinking what you need to do will only fog your brain as you tend to think of possible problems rather than just getting on and doing it. The hours flew by, but I got a lot done and the structure of the mask is well on the way to completion. There were no problems, although there were points where I thought my brain might tie itself in a knot and pop out of the top of my head, as I tried to work around certain angles and areas of the skull framework. Martin was really pleased with what I achieved and will continue working on it and next week I will be back at 101, to join him in the creative process once again. I can’t wait to see what stage it will be at by then. I will keep you all posted on the progress of Our Giant and will post pictures with each diary entry, so you can all see the progress for yourselves.